There will be no Protests of calls. All calls made in a game are final.

OCYDL reserves the right to add, delete or amend the rules/regulations/polices for the betterment of the program. 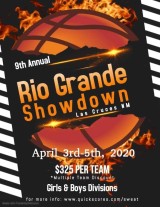